The establishment of St. James Parish occurred in November 1729 when the General Assembly of the colony of Carolina approved legislation which said: "The Southernmost Boundary of the Province shall be and is hereby appointed a separate and district parish by the name of St. James." Many years passed before the first church building was completed in 1751. In order to finish the church, the General Assembly levied an annual tax of one shilling and four pence on all taxes of the parish for three years.

During the American Revolution in 1781, St. James faced first of many crises when it was seized by British troops under Lord Cornwallis and converted into a stable and riding school for Tarleton's dragoons. 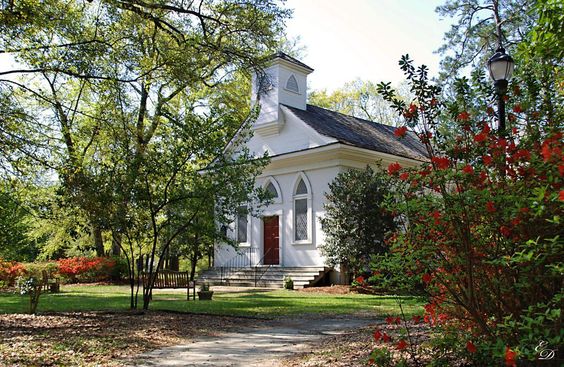 In 1839, construction began on our present church edifice. Considered to be an excellent example of neo-gothic architecture, the present church was consecrated in 1840 by Bishop Ives. To the right of the sanctuary is the painting "Ecce Homo". The painting has been attributed to Francisco Pacheco (1564-1654) – a Spanish painter, teacher, and scholar.

Twenty-five years later, St. James was again occupied by an adversary, but this time it was Federal Troops during the final stages of the Civil War. At this time the keys to the church were taken and all furnishings ripped out. The church was used as a hospital during this time of national crisis. Recovering slowly from the war the people of St. James found solace through common worship and fellowship.The graveyard is the sole remaining physical connection with the original church building. The last burial in the churchyard was in 1850 when Oakdale Cemetery was established and private burials within the city was prohibited by law. Among the historic tombstones is one marking the burial site of Thomas Godfrey, author of "The Prince of Parthia," thought to be the first attempt at dramatic composition in America. Another marks the grave of Cornelius Harnett, patriot and signer of the Articles of Confederation, who died a prisoner of the British during the occupation of the city. Major George Washington Glover, husband of Mary Baker Eddy, is also buried here.

Through the generosity of some of its members, the 20th century shined brightly upon St. James with the addition of the Parish House in 1902. In 1948 a new kitchen was donated and in 1951 and 1955 property was purchased, Milton Hall was constructed and the MacRae House acquired. The Church House, as it is now known, was designed by Henry Bacon, the architect who designed the Lincoln Memorial.

The 21st century began with the purchase of the old firehouse on the corner of Fourth and Dock Streets in February 2000. In its place now a beautiful multipurpose building named Perry Hall, which is dedicated to the Glory of God and for the spiritual, physical, and social nourishment of St. James and the Wilmington community. With the completion of the project, the St. James complex incorporates an entire city block.

Through the generosity bequests and gifts of many people, St James has become the largest church in the Diocese of East Carolina with a membership roll of over 1600 people. Each day children and adults are nurtured, the sick are cared for and the needy are helped through the sacred ministries that occur in this holy place. St. James' future depends on the faithfulness of its members today just as previous generations have bestowed upon us.

Susan Taylor Block's marvelous book The Temple of Our Fathers eloquently captures the interconnections between our national history and the events and challenges encountered by the people of St. James and the Wilmington community.


The St. Francis Memorial Garden was dedicated in 1984, made possible by the generosity of Mrs. William M. Shaw, in memory of her husband. The focal point of the garden is a St. Francis statue that was carved in Italy, the country of his birth in 1182. The Garden serves as a peaceful place for the burial of cremated remains of parishioners and their families. St. James keeps a tablet of the names of those interred in the garden. Every effort is made to maintain its beauty as a garden, and not as a cemetery. The cost of annual plantings is largely supported by donations, and the Garden maintained by volunteers.

For more information, to offer financial support, or volunteer, please contact the Parish Office or by phone 910-763-1628.

Sunday Services
Holy Eucharist Rite I - 8:00 a.m. - This quiet service does not include music.

Holy Eucharist Rite II - 9:00 a.m. - The music reflects varied styles and special opportunity for children and youth to participate as leaders in worship.

Holy Eucharist Rite II - 11:15 a.m. - A more formal and traditional style of worship with the ministry of our fine choir to lead us.

Holy Eucharist Rite II - 12:10 p.m. - We gather for worship in the chapel usually celebrating the life of a Saint.

Thank you for supporting the mission and ministry of St. James Parish! For more information see our give page.

To give a gift now, click the button below.

Give Now
On behalf of the wardens and vestry of St. James Parish, we want to thank you for being a part of the Community of St. James. The contributions and the faithful ministries of all who served in various capacities across our parish have helped this parish to fulfill the mission and ministry to which we are called. This year, with the challenges and opportunities at this time of transition, we are asking you to seriously consider committing to a pledge for 2020 so that we can more effectively plan the parish budget and the programs for 2020.
Make a Pledge

The St. James Parish Foundation was established in 2003 with the mission of supporting the needs of St. James Parish’s wonderful and historic church campus in perpetuity. The Foundation supports its mission by providing financial contributions to the Parish through targeted distributions for capital or specific campaign-related needs. Those contributions are through the assets that have been so generously donated to St. James Parish over the years by its’ congregation. The St. James Foundation is essential to the vitality, growth, stability and success of our parish. Its grants support the mission of the Parish, consistent with priorities established by the Vestry and the Rector.

Access your giving history and discover your St. James Parish community. Contact our Financial Administrator, Maria Hollopeter if you have any questions.